The Basin has been on quite a journey over the centuries. learn about the past, present, and future of our local rivers and streams.

​ The Upper Deschutes River Basin has been home to Indiginous people for thousands of years. Original inhabitants including the Wasco, Warm Springs, Paiute Tribes, all relied on the waters of the Deschutes and its tributaries for food, water and travel. Today these tribes are represented by the Confederated Tribes of Warm Springs Reservation of Oregon. The map on the right shows the location of the reservation as well as the Tribes’ ceded lands where Tribal members retained the right to hunt and fish for traditional foods, according to the Treaty of 1855. In addition, the treaty also ensures tribal members’ rights to gather traditional foods in usual and accustomed stations located on 10 million acres throughout the greater Washington, Oregon, Idaho and California regions.

For the region’s indigenous communities who have lived in these lands since time immemorial, the relationship to water goes far deeper than the idea of a resource. Water is an integral part of Tribal traditions, culture, spirituality and identity. Rivers are part of inter-dependent natural systems for which the Tribes act as stewards reaching forward in time for seven generations. 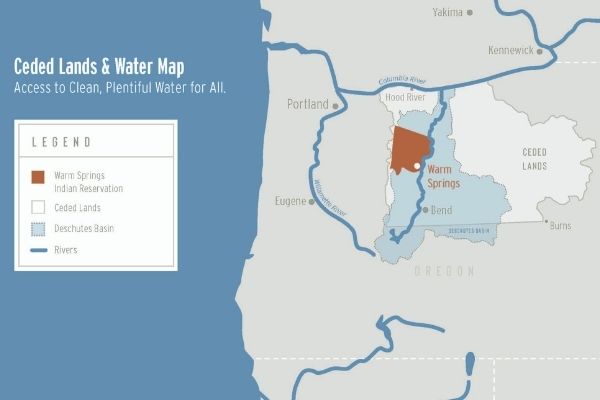 European Settlement - The First Major Changes to the Basin

The earliest Europeans to explore the area were French fur trappers. Observing the many waterfalls along the Deschutes, they named the river Rivère des Chutes or "River of the Falls". Lewis and Clark encountered the Deschutes River on October 22, 1805, referring to it by the Indigenous name, Towarnehiooks. Later renaming it Clarks River, upon their return journey. The Deschutes River was known as the peculiar river. As one of the largest spring-fed rivers in the United States, flows in the Deschutes were remarkably consistent throughout the year. More consistent, in fact, than any other river in the U.S. Further stabilized by its connection to groundwater, the integrity of the​ river bed was dependent on little variation in flows.

Beginning in 1830, thousands of people migrated to the Pacific Northwest from New England and the Midwest via the Oregon Trail, eventually forming the State of Oregon in 1859. Efforts to irrigate the Basin's arid lands, common to all western states, began as early as 1870 with the diversion of water from Whychus Creek (formerly known as Squaw Creek). As populations increased, the need to divert water from rivers increased.

Westward Expansion and the Homestead Act

In a speech in 1861, President Abraham Lincoln told the nation that it was the purpose of the government to "elevate the condition of men, to lift artificial burdens from all shoulders, and to give everyone an unfettered chance in the race of life." The passage of the Homestead Act in 1862 made good on this promise. Considered by historians as one of the country's most important pieces of legislation, the Homestead Act led to Western Expansion and gave opportunities for landownership to anyone willing to homestead - including formerly enslaved people, women, and immigrants. What the US Government considered "empty land" was the ancestral homes of vast populations of Indigenous Peoples, who were forcibly -- often violently -- removed from their homes to designated reservations. As a result of the Homestead Act, 270 million acres were claimed and newly resettled.

The Carey Act and Development of Western Water Law

The prevailing philosophy of the 19th century regarding natural resources was that any water instream is available for human use. Water was viewed as an unlimited resource and ​leaving water instream was tantamount to waste. In 1894, the Carey Act (also known as the Federal Desert Land Act) allowed private irrigation companies to construct water delivery systems (canals) and to sell water (water rights) to landowners for farming. As a result, several irrigation districts were established in the Deschutes Basin starting in 1904. Eight irrigation districts now exist in the Deschutes Basin with 'priority dates' ranging from 1899-1916. By 1924, 28,500 acres of land in Central Oregon were irrigated and supported a population of 10,000 people.

Water rights in the West are complicated and began in the mining camps of the mid-19th-century Gold Rush. Prospectors had to stake a claim for their mine and the water necessary to operate it. The ‘prior appropriations doctrine’ which is at the heart of water laws was locked into place at that time. The law's founding principle is based on "first in time, first in right," ​setting the stage for the hierarchy between senior and junior water rights holders.

The U.S. Bureau of Reclamation and Storing Water for Farmers

The U.S. Bureau of Reclamation (BOR) was created in 1902 to address water scarcity and promote settlement in the Western United States. Since its inception, the BOR has made a lasting impact on the landscape of Oregon building twenty-nine dams, most in the arid parts of the state, and some including impounded reservoirs for irrigation purposes. The philosophy behind “Reclamation” was that irrigation would “reclaim” otherwise fertile land from the “stingy, unproductive” aridity of the West. In essence, make the desert bloom.

While earlier homesteaders closer to Bend had seniority in their water rights, later homesteaders arriving in the Madras and Culver area in the early 1900 relied on dry-land farming for then predominantly wheat fields. Despite early success, water shortages began to affect farming dry farming after 1925. Coupled with the arrival of the Great Depression, irrigators were desperate for a reliable source of water.

Senior irrigation districts in Central Oregon already accounted for nearly all the water available in the Deschutes River and its tributaries. Securing reliable water for the junior irrigators of North Unit Irrigation District (Madras-area) would require the use of stored winter flows. Construction on Wickiup Reservoir was completed in 1946 and began holding back winter flows in the Deschutes River to use in the following summer, when demand outstripped supply.

By 1949, 50,000 acres of land were receiving water, but it came at a severe cost to the ecology of the Upper Deschutes River. For decades, flows in this reach would fluctuate significantly between the “storage season” (winter) with flows running at around 20 cubic feet per second to flood-like conditions when these stored flows were added to the Deschutes in the summer increasing flows to up to 2000 cubic feet per second.

The 1960s saw a period of growth for the environmental movement with a newfound national interest in conservation and preservation. Hundreds of laws were enacted in the following 60 years, including the Clean Water Act, the Wilderness Act, and the Water Quality Act, but the law that had the most effect on the Deschutes Basin is the Endangered Species Act of 1973.

The purposes of the ESA are to prevent extinction and recover endangered species through the protection of the species and the “ecosystems upon which they depend”. Heated litigation over the ESA listing of the Oregon Spotted Owl between the government, environmentalists and the timber industry came to a head in 1990 resulting in intense conflict in affected communities as well as significant environmental regulation in the logging industry. It wasn’t difficult to draw potential parallels to irrigation and the effects decades of diversions, storage and other methods of water management had on sensitive riverine ecosystems and their inhabitants. 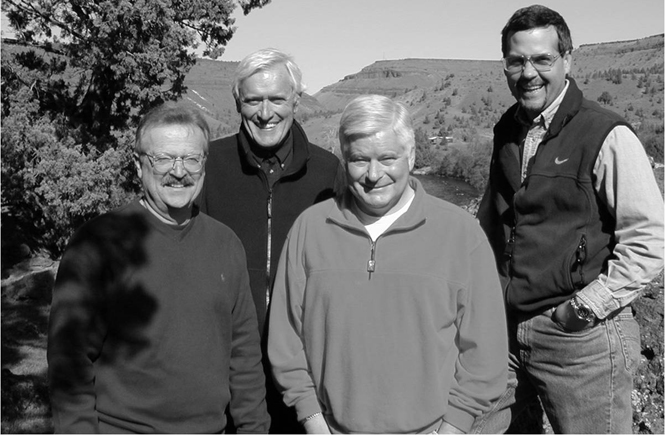 Leadership in the Basin

The Formation of the Deschutes River Conservancy

Decades of Diversions Take Their Toll

A Path Forward to a Better Future

The Habitat Conservation Plan Lays a Foundation for Restoration