Since 1996, the DRC has accomplished more than any other streamflow restoration group in the Northwestern United States.
Historically, nearly 90% of the streamflow from the Deschutes River in Bend was diverted through irrigation canals during the irrigation season. These diversions caused a dramatic reduction of streamflow in the middle reach of the Deschutes River, between Bend and Lake Billy Chinook.

Through the years, the Deschutes River Conservancy has worked with irrigation districts and other partners to create a more efficient water delivery system to allow more water to remain instream. As a result of our collaborative approach, this section of the Deschutes River has seen a five-fold increase in streamflow during the hot summer months. The improvement to the health of the river, as well as to the resident fish and wildlife, has been dramatic.


Restoration and Reintroduction Milestones in the Deschutes Basin

An unprecedented effort is underway in the Deschutes Basin to reintroduce steelhead and salmon. Since the Pelton Round Butte Hydro-Electric Project was built in the 1960s, these anadromous fish have been blocked from the Deschutes Basin above the dams. Over the past several years, the DRC and our partners have been working to restore and maintain the watershed conditions necessary for successful salmon and steelhead reintroduction.

2011 was a very encouraging year for these reintroduction efforts. In early 2011, Portland General Electric, The Confederated Tribes of the Warm Springs Reservation and the State of Oregon celebrated the return of the first adult steelhead from the 2007 reintroduction. Additionally, major flow restoration milestones were achieved on both Whychus Creek and the Crooked River.

A healthy watershed and a thriving ecosystem are the keys to our future here in the Deschutes Basin. When we have healthy rivers, streams, and lakes, we know we can support the diverse needs of people and wildlife.

Living in the high desert, we all rely on the Deschutes River and its tributaries. When we began restoring streamflow and improving water quality 25 years ago, the landscape looked much different. Whychus Creek in Sisters ran dry in the summer, the Middle Deschutes, downstream from Bend had only 20% of the flow it has today, the Crooked River downstream from Smith Rock suffered from low flows and high stream temperatures.

PROTECTED STREAMFLOW IN THE DESCHUTES BASIN: 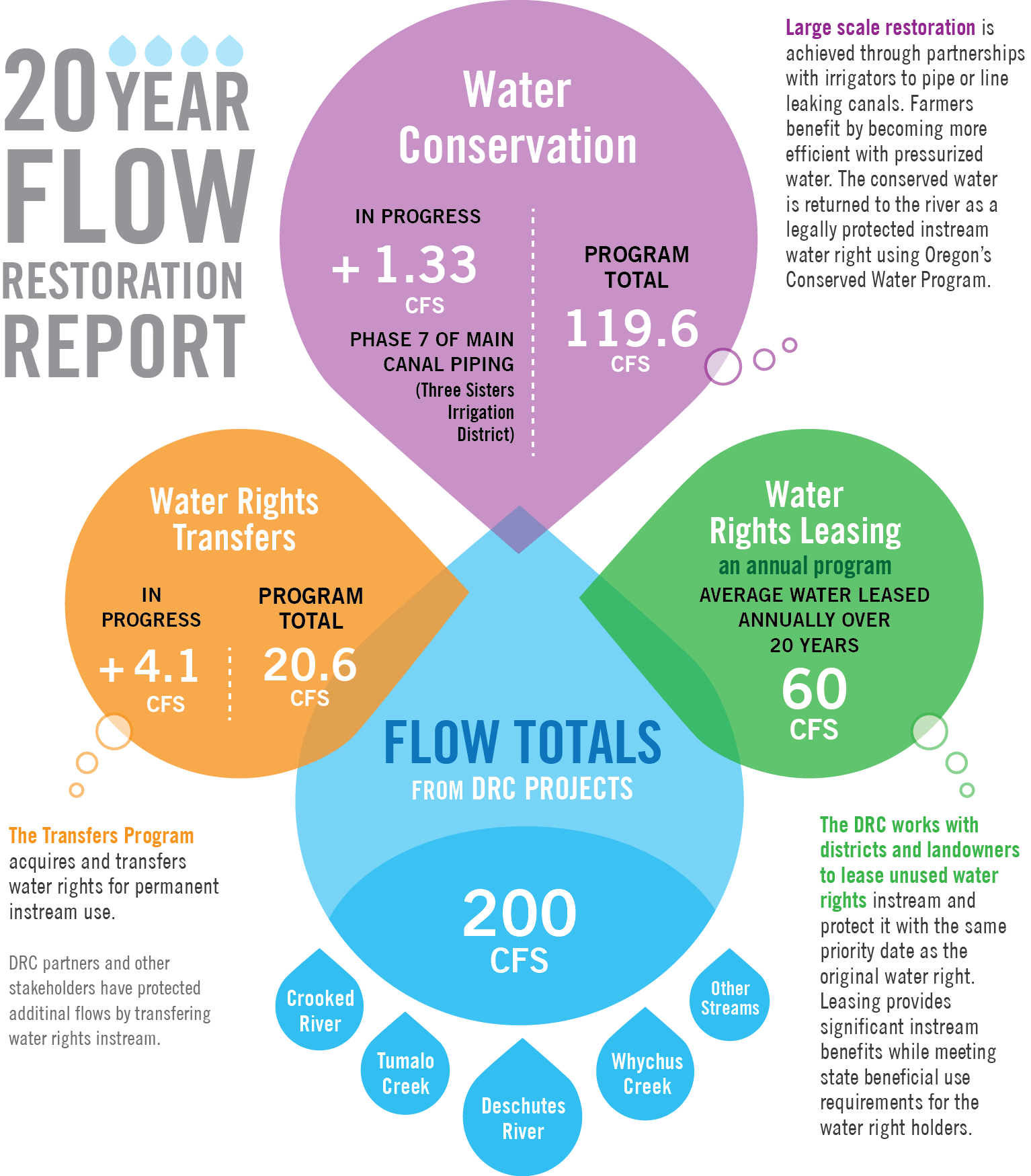