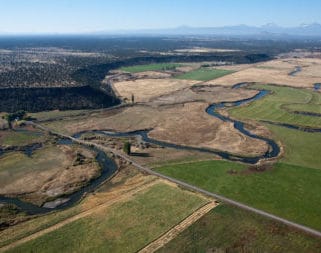 In the Western United States, the availability of water has become a serious concern for many communities and rural areas. Central Oregon is no exception. From river to river, situations are different depending on the water source, geology, and demand. In this series, we’re going to take a look at the tale of two rivers: The Deschutes River and the Crooked River.

The Crooked River is situated in the southeastern part of the Deschutes River Basin, running from the Ochoco Mountains through the City of Prineville to its confluence with the Deschutes River at Lake Billy Chinook. Flows from the Crooked River and its tributaries support critical habitat for migrating salmon and steelhead as well as providing water supplies for the city of Prineville and its surrounding agricultural lands. Balancing water supply with demand is always a delicate process, but this year will be especially difficult.

Water projections for the Upper Deschutes Basin are nothing short of dire for 2020. After an especially dry winter with little snowfall and scant spring rain, reservoirs are much lower than normal. In fact, this will be one of the worst five water years since 1977 according to the Oregon Water Resources Department.

Prineville Reservoir and Bowman Dam play a key role in seasonal flows in the river and in storing water for summer irrigation. Flows stored behind Bowman Dam are used to keep the river flowing year-round, but with levels in the reservoir starting so low at the beginning of the season, meager inflows from melting snow will not be enough to ensure adequate water supplies. To put a number to it, Ochoco Irrigation District Manager, Bruce Scanlon soberly reports that inflows are currently less than 1000 cubic feet per second, (CFS) when they were closer to 7000 CFS at this time last year. It’s not uncommon to have variable water years, but this deficit sets up the basin for a rough year this year and potentially even tougher next year if we face another dry winter.

“This year is a deep contrast from last year and shows the variability of the Crooked River,” says Kyle Gorman, Regional Manager for the Oregon Department of Water Resources. The Oregon State drought monitor has categorized most of Crook County in severe drought.  A year ago, 17.3% of Oregon was considered to be in a drought. Today, that percentage has soared to a staggering 96.2%.

“Careful water management is vital this year. We could be seeing flows as low as 20 CFS running through the City of Prineville which will affect everything from fish habitat to farming to recreation.” Gorman adds, “It is vital for water supplies that we have a better snowpack next year.”

Unlike the Deschutes River which benefits greatly from its prolific connections to groundwater and springs, as well as access to snowmelt, the Crooked River is much more vulnerable in a dry year. According to Chris Gannon, Executive Director of the Crooked River Watershed Council, the geology in the Crooked River basin is much older than the Cascades, and weathered geologic materials are less permeable meaning the river has much less surface to groundwater connection than neighboring watersheds. “It is a surface water dominated system,” says Gannon. “The majority of the water supply comes from whatever precipitation the Ochocos receive and store as snowpack each winter.”

The primary contract holder for the water is the irrigation district, which uses a cumbersome series of 30 pumps, in some cases, lifting the water three separate times, to reach its final destination. According to Bruce Scanlon, Ochoco Irrigation District has numerous opportunities to modernize its system and lower its current high operating costs. In the coming years, they plan to replace aging pumps, increase efficiency in their water conveyance system, and reduce “tailwater”, or water that flows out past the end of a canal and back to the natural system.

Farmers in the Crooked River Basin have an annual water right certificate the entitles water uses to access the equivalent of 4 acre-feet of water per acre. Visually, that is the volume of water it would take to cover one acre of land with 4 feet of water over the course of the irrigation season. In a normal year, farmers are usually allocated about 3 acre-feet per acre reserving any supplies above this amount in the reservoir. This year, in anticipation of a significant lack of water, farmers will need to make do with 2.5 acre-feet. This will force many farmers to make some critical decisions about how, what, or if they plant this year.

Wade Flegel, Ochoco Irrigation District Board Chair and third-generation area farmer uses techniques garnered from his dual Bachelor of Science degrees in Agriculture Engineering Technology and Agriculture Resource Economics from Oregon State University. Flegel has always planted a mix of crops including alfalfa and grass hay rotated with wheat or grain hay. For the last 6 years, he has also been planting hybrid carrot seed, a low water crop. To maximize his water allocation and yield, Flegel uses irrigation scheduling — timing water use around natural precipitation — as well as the practice of deficit watering where you do not water to the full need of the plant. The yield is reduced, but in times of scarcity, it can still be an effective way to use the water you have.

Flegel sees the improvements coming to the watershed as a huge step forward. By working with the Deschutes River Conservancy and other project partners, OID will be able to operate its district in a way that could meet the needs of the river along with those of agricultural crops to help farmers produce in a way that’s economical. “This will be a win-win,” says Flagel. “When we started, we were looking at the situation in the Klamath Basin where farmers were battling against conservation interests. We wanted to be proactive and look ahead to find solutions that work for both sides.”

To this end, the Deschutes River Conservancy is working with Ochoco Irrigation District on a project called the McKay Creek Switch. This Switch will restore natural flows to McKay Creek, a key steelhead rearing tributary of the Crooked River while supplying farmers with more reliable water. Patrons currently using water from the creek to irrigate will become part of Ochoco Irrigation District and the creek will go back to running with its natural flows. This kind of partnership is how the Deschutes River Conservancy works best. Our method is to find ways for both the water users and the river to benefit.

Another way the DRC will be working in the Crooked River Basin is through a dry year leasing program that is currently in development. This will be an extension of the DRC Annual Leasing Program and will come into effect when a dry year is announced in April. Water users who decide to forego planting for that year due to lack of water can share their water with other patrons and with the river. Their unused water will be shared equally between irrigation and instream needs. This type of water marketing has been successfully used around the Deschutes Basin to bolster flows while keeping irrigators whole.

When ready, this program will be a benefit in a dry year, like the one we are anticipating this year. DRC Program Manager, Natasha Bellis agrees. “In extraordinary circumstances like a very dry year,” she says, “we need to get inventive, and these kinds of programs are the way to do this.”