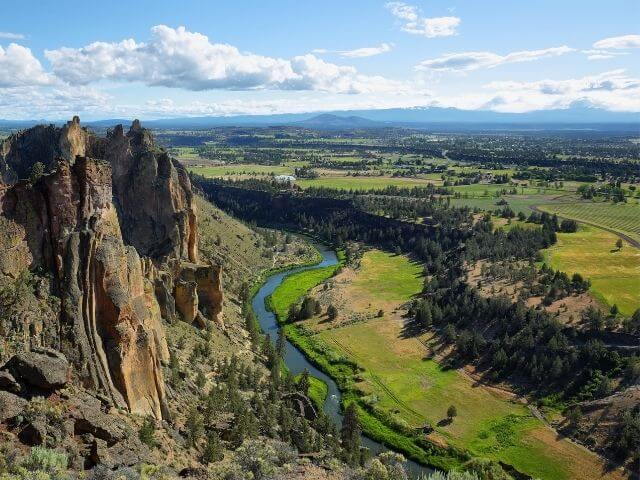 Central Oregon Irrigation District (COID) received final approval from the Oregon Water Resources Department for their West-F project that piped 2,210 feet of a leaky lateral canal north of Redmond. As a result, the 1602 acre-feet of water saved by COID have been transferred to 642.1 acres of farmland in North Unit Irrigation District (NUID) near Madras, the area’s most junior water users. The equivalent amount of water was then transferred from NUID into the Crooked River. A boost in flows of up to 16% (up to 6 cubic feet per second) during the irrigation season is a crucial step toward restoring habitat and water quality for returning steelhead and Chinook salmon as well as resident redband trout.

This project contributes to a 3rd and final phase of a complex program, a water supply initiative to improve the reliability of water deliveries to the farms in NUID, a mostly commercial farming area with increasingly unreliable water supplies while improving flows in the Crooked River. Another added benefit of the project is that it reduces the necessity of expensive pumping costs to pull water from the deep canyons of the Crooked River. Recently installed variable frequency drive pumps will also allow NUID to manage minimum flows in the river more responsively. Future projects involving COID and NUID coordination will likely focus on restoring flows in the Upper Deschutes River to support Oregon spotted frog and redband trout habitat.

The Deschutes River Conservancy and the Districts are working on other projects and programs around the Deschutes Basin that will improve streamflows and water quality for fish and wildlife while also addressing farmers’ and cities’ needs. The DRC supports and facilitates conservation and water marketing projects with the districts to meet foundational standards set by the Habitat Conservation Plan. Additionally, the DRC shares a leadership role with the Confederated Tribes of Warm Springs to lead the Deschutes Basin Water Collaborative, a group seeking to accelerate streamflow restoration in the basin.

Mike Britton, North Unit Irrigation District Manager: “This project supports junior water users at a time when water scarcity has destabilized many family farms. The reduction in pumping costs will also be a significant benefit for Madras area farms.”

Craig Horrell, Central Oregon Irrigation District Manager and President of the Deschutes Basin Board of Control: “COID is proud that this conservation project benefits our patrons and generates a more reliable water supply for North Unit Irrigation District farmers in an environmentally and economically sustainable manner. This project is a win for farmers, the Crooked River, and fish.”

Kate Fitzpatrick, Executive Director of the Deschutes River Conservancy: “It’s very gratifying to see this project come to fruition. Paving the way to share water in the basin is a major focus of the DRC right now. We’ve recently launched and funded two new programs that will help conserve water and restore flows. Our On Farm program works with landowners to increase their on-farm efficiency and our Water Marketing program facilitates the sharing of water between districts operating in water abundance with districts struggling with scarcity. When we can improve these systems, it reduces demand and benefits our precious rivers and streams.”

About the Deschutes River Conservancy:  Twenty-five years ago, the Deschutes River Conservancy (DRC) formed with a mission to restore streamflow and improve water quality in the Deschutes River Basin. The DRC specializes in programs and projects that employ voluntary, market-based incentives to restore flows. The DRC is non-litigious and serves as leaders and facilitators of basin-wide water management conversations. The board is comprised of key private and public stakeholders in the basin. The organization has worked with eight irrigation districts and over 200 landowners to restore over 208 cubic feet per second of streamflow to the basin’s rivers and streams. www.deschutesriver.org

About North Unit Irrigation District: North Unit Irrigation District (NUID) has served the agricultural water needs of Jefferson County Oregon and the community since 1945.  The district was formed (1916) with the sole purpose of delivering agricultural water and today remains the largest irrigation district in Central Oregon. NUID maintains approximately 300 miles of lined, piped, and open ditch delivery systems to service 900 active accounts over 58,880 acres.  NUID is the most junior water right holder in the Deschutes Basin. As a junior water right holder in the basin, the district and its farmers aggressively pursue innovative conservation practices to make the most efficient use of its limited supplies. www.nuid.org

About Central Oregon Irrigation District: Established in 1918, Central Oregon Irrigation District “COID” is a Municipal Corporation of the State of Oregon. The District’s mission is to provide a reliable supply of water to 3,500 patrons throughout Bend, Redmond, Powell Butte, and Alfalfa. COID operates and maintains over 400 miles of canals that collectively deliver water to approximately 46,222 acres of productive land. www.coid.org

About the DBBC: The Deschutes Basin Board of Control is made up of eight irrigation districts in Oregon’s Deschutes Basin. The districts supply water throughout the Deschutes Basin to 8,700 patrons across 155,662 acres. The districts work in partnership with conservation groups and local, state and federal agencies to increase instream flows in rivers and creeks, while improving fisheries passage and ecologically important habitat. Since 2000, the districts have increased instream flows by nearly 80,000 acre-feet in the Deschutes River, Little Deschutes River, Ochoco Creek, Whychus Creek, Tumalo Creek and Crescent Creek, benefitting salmon, steelhead, bull trout, Oregon spotted frog and other species. For more information on the irrigation districts and their conservation efforts, visit www.dbbcirrigation.com