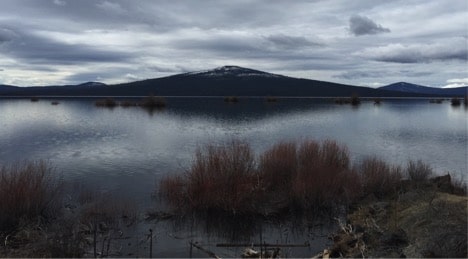 It’s dawn. You rhythmically dip your paddle, pull, then glide east across the surface of Wickiup Reservoir. You’re alone in your canoe and for all you can tell you’re the first human to ever cross this stretch of water. You feel primal, a part of the landscape. Maybe you feel the same as early humans felt—maneuvering a simple craft through the natural world in search of…?

However, as you approach the east side of the lake, a large earthen structure comes into view and you are reminded that your entire experience has been no less artificial than the city you drove away from hours before.

The City of Bend was incorporated in 1905 as a small town with only a few hundred residents. Five years thereafter, Newport and Cline Falls Dams were constructed on the Deschutes River in Downtown Bend with the main purpose of generating hydroelectricity for the slowly-growing local population. In the following decades, a number of additional dams were built along the Deschutes, beginning with the North Canal Dam Complex (Steidl and Tweet Dam) in 1912, Colorado Street Dam in 1915, Crane Prairie Dam in 1922, Wickiup Dam in 1949, Pelton Dam and Pelton Reregulating Dam in 1958, and finally Round Butte Dam in 1965.

These massive structures each took years to build—no surprise when you consider their dimensions. Round Butte Dam, for example, is more than 400-feet tall, 1,300 feet across, and 1,500 feet thick at the base, created with 10 million tons of material, at a cost of $62 million (in 1965 dollars).

Why did we go through all this trouble?  What purpose do these dams serve?

The Deschutes River has been dammed for three major reasons: water storage, timber conveyance, and electricity generation. These services have allowed agriculture and industry to flourish in Central Oregon in a landscape that would otherwise support just a fraction of the current population. Much like turning a faucet on and off, flow levels in the Deschutes River are carefully managed by controlling the outflow from these dams (primarily Wickiup Reservoir) in order to sustain a more reliable agricultural water supply. The dams on the Deschutes impound almost one million acre-feet of water in their reservoirs and the Pelton Hydroelectric dam generates around 500 megawatts of electricity.

While electricity generation is certainly an important function of the Deschutes River dams, I think it’s safe to say that it is basically an afterthought compared to water storage. If you removed all of the hydroelectric components from Central Oregon dams, the local population would still be able to persist. At worst, electricity could be derived from other sources.[1]  However, eliminating the water supply provided by these dams would pose some serious challenges to local agriculture within the Deschutes River Basin.

In the coming articles, we’ll take a closer look at where the water goes when it leaves a reservoir on the Deschutes, with a focus on the largest reservoir on the Upper Deschutes River—Wickiup. It’s been a tough year for Wickiup Reservoir and we’ll try to build a better understanding of the societal and ecological implications of the current water supply challenges, which stand to have significant impacts both on local agriculture and the wildlife that calls the Deschutes River home.

[1]Hydroelectric power is widely considered to be a ‘sustainable’ source of energy because it does not involve burning fossil fuels like coal or natural gas. While I don’t want to focus on hydroelectricity in the context of this article, I do want to mention that there is evidence that the greenhouse gas emissions associated with construction of large dams has been estimated to be much more significant than previously thought. An argument could be made that, in some cases, those emissions are significant enough to disqualify hydroelectricity as a ‘sustainable’ energy source.

About Jake Sahl:
Born and raised in California, Jake moved to Bend in early 2017. As a hydrologist, he is excited to absorb all the local knowledge of the Deschutes River system! Jake has a BS in Geohydrology from UC Santa Barbara and a MESM in Water Resources from the Bren School of Environmental Science and Management. As a consultant, he strives to mitigate human impacts on the freshwater systems upon which we rely and to restore natural function to highly-urbanized watersheds. Jake spends too much of his free time rock climbing but also gets out boating and cycling whenever possible.