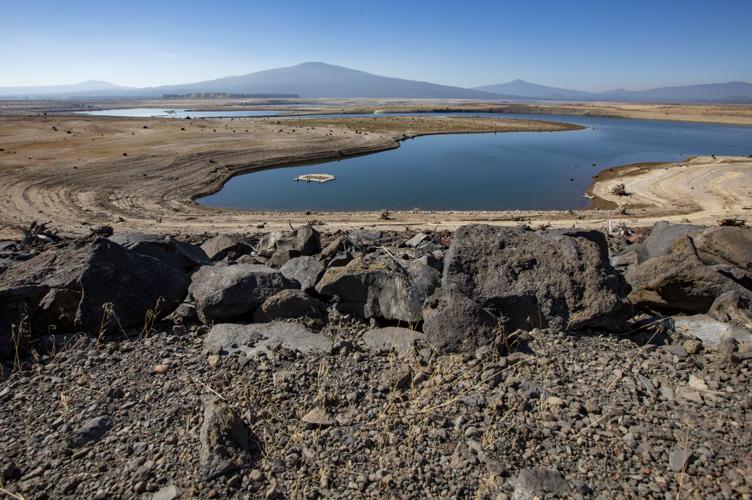 Wickiup Reservoir, a key bellwether for the amount of water available for farmers in Central Oregon, has nearly emptied again at the end of the irrigation season.

Wickiup was just 3% full as of Tuesday, with around 6,600 acre-feet of water, according to the Bureau of Reclamation website. Some water is being retained to avoid the turbidity problem that occurred two years ago, when the Deschutes River turned an unusual shade of green in Bend.

The amount of the remaining water flowing out of the reservoir is currently being reduced every 12 hours. Jeremy Giffin, the Deschutes Basin watermaster, said the goal this winter is to never go below 120 cfs.

Wickiup Reservoir holds back irrigation water in winter for North Unit Irrigation District farmers to use in the spring and summer months. But a multiyear drought has drained the reservoir to the bottom for three straight years and in four of the last five years.

A Habitat Conservation Plan signed between the U.S. Fish and Wildlife Service and irrigation districts in the Deschutes Basin requires that the amount of water released into the Deschutes River every winter from Wickiup stays at a minimum of 100 cfs until 2028, when the level will increase to 300 cfs.

Prior to agreements made between Fish and Wildlife and irrigation districts, the level of water flowing out of Wickiup in winter was as low as 20 cfs. The smaller releases allowed Wickiup to refill faster in winter than it can today. Canal piping projects, which conserve water lost to seepage, help to offset some of the water that is no longer available due to increased winter releases.

“Consistent with the HCP’s conservation measures, winter flows from Wickiup Reservoir will increase above the minimum (100 cfs) flow proportional to the amount of water that was made available as a result of piping,” said Moran.

“One option is to steadily release the conserved water throughout the winter, adding to the 100 cfs flow. Alternatively, in coordination with the service, permittees may wait and release the water later in the water year to further enhance Oregon spotted frog habitat,” she said.

Giffin said because the reservoir will be starting its refill from the ground up again this year, the amount of water available in the spring of 2023 for irrigation is likely to be an amount similar to what the reservoir held last April. Better-than-average snowfall this winter could help to change that.

“I am anticipating around the same fill levels as last spring. However, I am hopeful we have an above-average snowpack this upcoming winter, which could help lift those levels a bit higher than last spring,” said Giffin.

At the end of March this year, four area reservoirs were at record low levels for the start of an irrigation season. Wickiup was 55% full, a level that forced the North Unit Irrigation District to cut the allotment of water to its patrons to just 0.45 acre-feet, the lowest allocation farmers have had in that area.

The start of the irrigation season also saw Prineville Reservoir at 26% full and Ochoco Reservoir at 11% full.

Due to the unique volcanic geomorphology of the Upper Deschutes Basin, what filters into the area’s streams and reservoirs often depends on snowpack of the previous winter. Last year in the Upper Deschutes Basin, snowpack was just 54% of normal at the end of March, according to the Natural Resources Conservation Service. A late-season snowfall helped to make up some ground.

“Early snowmelt occurred towards the end of March and into early April, after which additional snow accumulation resulted in a late peak — nearly one month late compared to normal — in snowpack that was 80% of the normal peak,” said Matt Warbritton, a hydrologist with the Natural Resources Conservation Service.

Central Oregon’s drought has been described as the worst on record, going back 127 years.

Larry O’Neill, an associate professor at the Oregon State University College of Earth, Ocean, and Atmospheric Sciences, said seasonal forecast models suggest some reason for optimism for the upcoming winter, with above-average precipitation forecast in Central Oregon for December to February and near-normal temperatures.

“The projection for the Cascades is consistent with the historical tendencies for La Niña,” he said. “The projection for more precipitation than normal this winter from the seasonal forecast models is of low to medium confidence.”