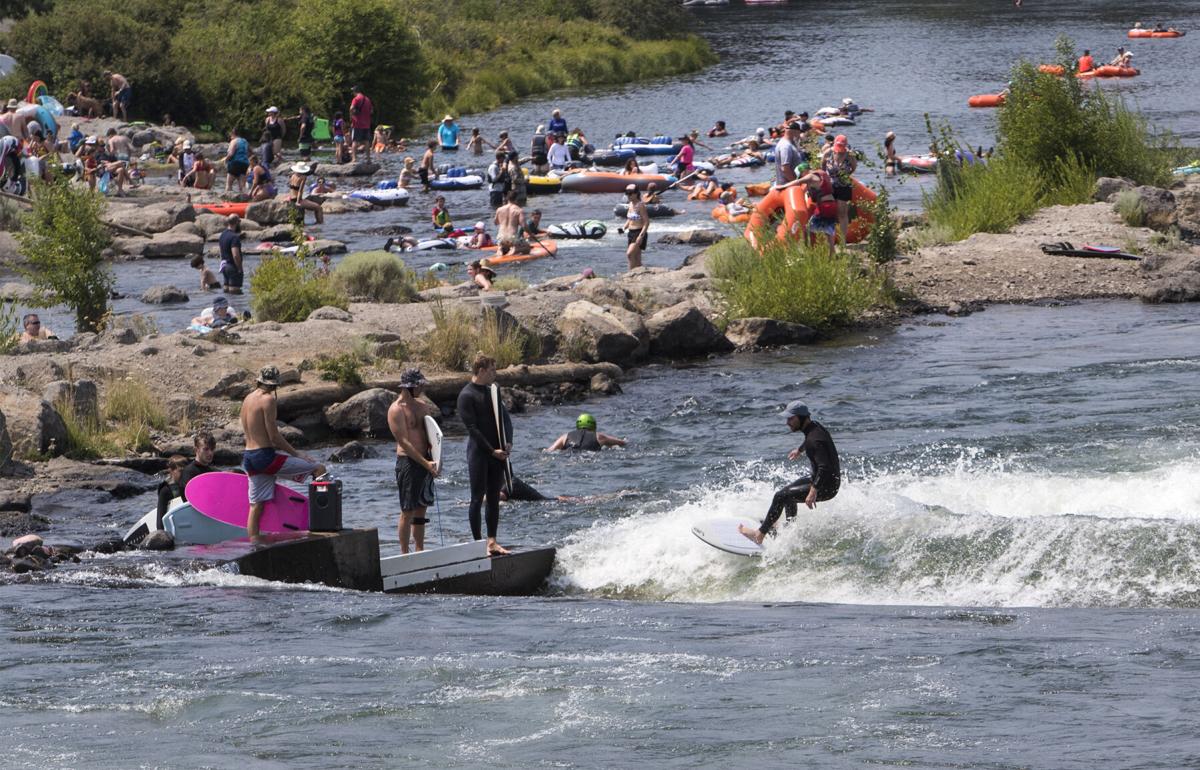 As the river level drops, anglers, surfers boaters and other river-users plan to make adjustments

Extreme drought is setting up the Deschutes River for lower flows next month — not the best news for tubers, surfers and kayakers who depend on the swift-flowing river for summertime fun. But seasoned river users say there is still a lot of life left in the Deschutes this year.

Ryan Richard, the Bend Park & Recreation District waveshaper, said rivergoers will notice a slowdown in the flows but the standing wave and rapids will still be rideable, even after Wickiup Reservoir is drained.

“If I had to bet today, I would think that recreation at the park shouldn’t be too affected,” said Richard, who manages the flow of water in the park by manipulating panels under the river.

The North Unit Irrigation District announced last week that it expects Wickiup Reservoir to run out of stored water by around Aug. 18. Currently, it’s down to just 12% of capacity. That’s a problem for North Unit patrons, who will be without water for their crops. But it is also a threat to others who use the river, including wildlife, anglers and rafters.

Kyle Gorman, region manager for the Oregon Water Resources Department, said when storage water is exhausted in mid to late August, the flow will likely drop by about 450 cubic feet per second.

Downstream from Wickiup, Benham Falls, a popular area for kayakers, will run at a rate of around 1,000 cfs, said Gorman. The rate at Benham Falls is currently 1,415 cfs. The exact date of that drop is not known and depends on various factors, but could occur by late August.

At the Bend Whitewater Park, Richard, the waveshaper, said abundant rainfall is one factor that could keep river levels higher, but even without rain, the standing wave in the whitewater park should still remain intact. The park even functions in winter when the river is at its lowest.

Some flow to the wave could be diminished in late August, creating “boney” conditions, he said. That’s surf-speak for times when the river level is lower, exposing more of the river’s rock.

“We need to maintain an upstream pool for the Oregon spotted frog,” said Richard. “We may make the whitewater channel really boney, but the tubing channel should remain usable.”

The upstream pool is located between the whitewater park and the Les Schwab Amphitheater. The marshy area on the west bank of the river in this area is critical habitat for the Oregon spotted frog and the water level must remain at a consistent level throughout the summer, said Richard.

“It got decimated before the park was there because the water was up and down all the time and it’s hard for them to live,” said Richard. “But it’s an important habitat because it’s their furthest downstream habitat.”

Anglers may notice changes too, said Tye Krueger, the owner of the Confluence Fly Shop in Bend.

In lower water levels, fish consolidate in pockets of the river and compete for food and habitat, said Krueger. Lower river levels also increase the temperature in the river, another factor that can be harmful to fish.

“Fish that in tight low water are skittish, they are harder to target, they are on edge, less comfortable by that low water,” said Krueger. “There is an element of stress when water levels drop.”

Krueger said when river levels drop he may advise anglers to try other areas, such as the Fall River, the Crooked River and the lower Deschutes.

Richard said he also has a game plan for times when the river is running lower due to irrigation district curtailment. He is able to manipulate panels under the surface of the river and reshape the flow of water in the park, directing water to where it’s needed most.

Priority one is maintaining a steady water level in the upstream pool for the frogs and their fragile egg masses, he said. Maintaining an even flow in the tubing channel is also critical, as this part of the river doubles as a fish ladder.

The center channel, which contains the large wave for surfers and kayakers, has a lower priority from an environmental standpoint, said Richard, and water can be shifted away from it if needed.

Using an iPad, Richard can manipulate the underwater panels that divert the water and shape the waves. He surfs the wave himself, so he knows what works best for wave riders.

“If I have cell service I can control the park from virtually anywhere in the world,” said Richard. “Sometimes I will make 20 to 30 minor adjustments per day, ones that are necessary for environmental factors.”

River-rafting trips along the Deschutes River can also be impacted by the shifting river flows.

Justin Wellman, the recreation manager at Seventh Mountain River Co., said when the river level drops he needs to make changes to his trips, including reducing the number of people in each boat. Lower river levels can also damage boats, he said, as more rock gets exposed.

“The trip is going to change. As the water drops, we might go from an hour on the water to an hour and a half on the water as it will be slower,” said Wellman.

The focus of the trips may shift to include more education and geology lessons, he said, but they can still be run.

“The rapids may not be as splashy, but there will still be technical moves to make,” he said. “I am confident that we will still have an enjoyable trip on the water. It’s just a different trip.”